Plan On Paying Tax On More Gifts This Season

Since June of 2018, the tax world has been saturated with speculation and news about the landmark ruling in the U.S. Supreme Court South Dakota v. Wayfair[1]. Initially many believed that this case only affected online retailers like Amazon, Walmart.com and Wayfair, but that fantasy was short lived. As states began to pass versions of economic nexus laws, it quickly became clear that this case has far broader implications than was envisioned when the case was presented to the Supreme Court.

Sympathy For The States

As the economy has morphed and online shopping gained in popularity, the states viewed failure to collect tax on literally billions of dollars of sales as the largest tax avoidance scam ever perpetrated by corporate America and the consuming public. Growth in state sales tax collection rates had been in decline[2] and state legislators searched for ways to increase revenues without increasing tax rates on individuals and businesses. The map below illustrates the dire economic circumstances that plagued approximately half of the states across the country.

As the economy has shifted to be a more service-based economy, there was a perception among state legislatures, though only partially valid, that sales over the Internet received an unfair advantage over brick-and-mortar sales due to the avoidance of sales tax. In an effort to “level the playing field,” a majority of sates chipped away at the historical physical presence requirement for nexus creation and some of their original foes, namely Amazon, became an ally in the cause. 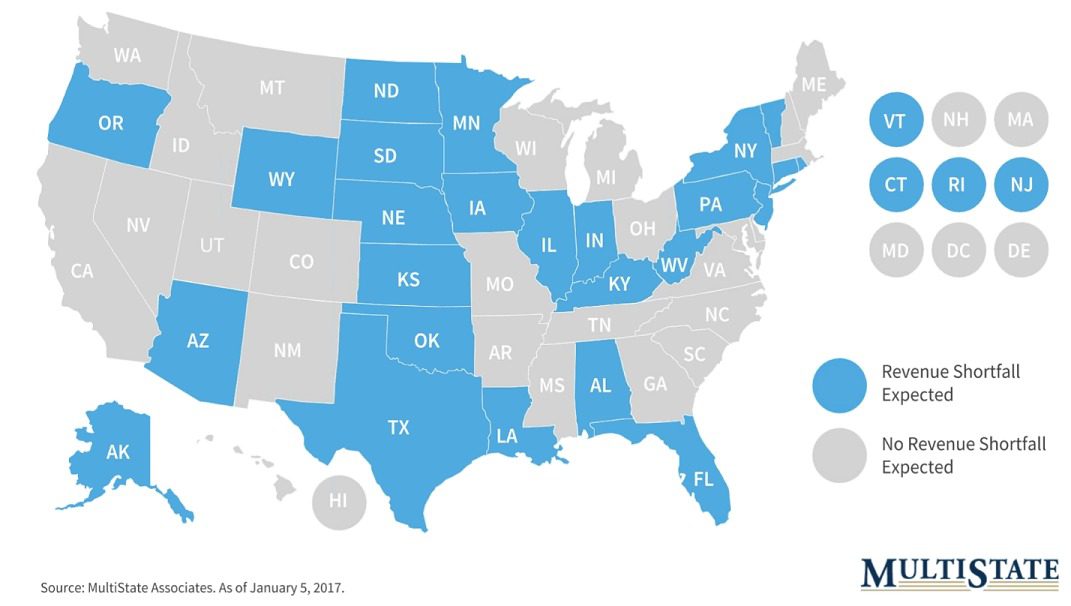 The States Win — Show Me The Money

After the Wayfair ruling, many states didn’t wait long to pass rules and legislation to enact laws, most mirroring South Dakota. As of the date this article was submitted for publication, all but two of the 45 states as well as the District of Columbia that have a sales tax have adopted economic nexus laws. Many states have pushed the needle even further by adopting marketplace facilitator laws. These laws were enacted to put tax collection responsibilities on facilitators like eBay and Etsy rather than smaller retailers who sell through online platforms. While this sounds like a simpler method, many online retailers sell direct to consumers and through third-party facilitator sites and are still required to file sales tax returns as well as track sales made through marketplace facilitators. The need for detailed records in supporting the audit function have never been greater.

Now that we are approaching the second holiday season since the Wayfair decision it is important to assess its impact on the states, retailers and equally important, consumers. Prior to Wayfair there was widespread speculation that the existing sale tax regime enabled Internet sellers and consumers to skirt billions of dollars of sales tax. The National Conference of State Legislatures (“NCSL”) speculated that the lost revenue for 2015 amounted to $25.9 billion in 2015 while the Government Accountability Office (“GAO”) estimated 2017 lost revenue to be between $8.5-$13.4 billon. Now that some time has passed, it is quite apparent those estimates were grossly overstated.

Of the states adopting economic nexus, none have even reached the NCSL’s estimate and only two states reached the median of the GAO’s estimate[3]. This begs the question, why are the numbers so far off from estimates provided to the Court?

One thing that was largely ignored is the extent that the largest retailers were already collecting tax on remote sales. In 2017, the Government Accounting Office estimated that 75% to 80% of state and local taxes on out-of-state sales made by remote sellers were already being collected[4]. Another factor is the overestimate of electronic commerce. The Census Bureau estimated that almost 89% of retail sales occur in physical store fronts. [5]

It turns out this landmark case fundamentally affects small and medium sized businesses (SMBs). It is the SMBs that lack the tax departments and software means of Amazon and other large retailers. 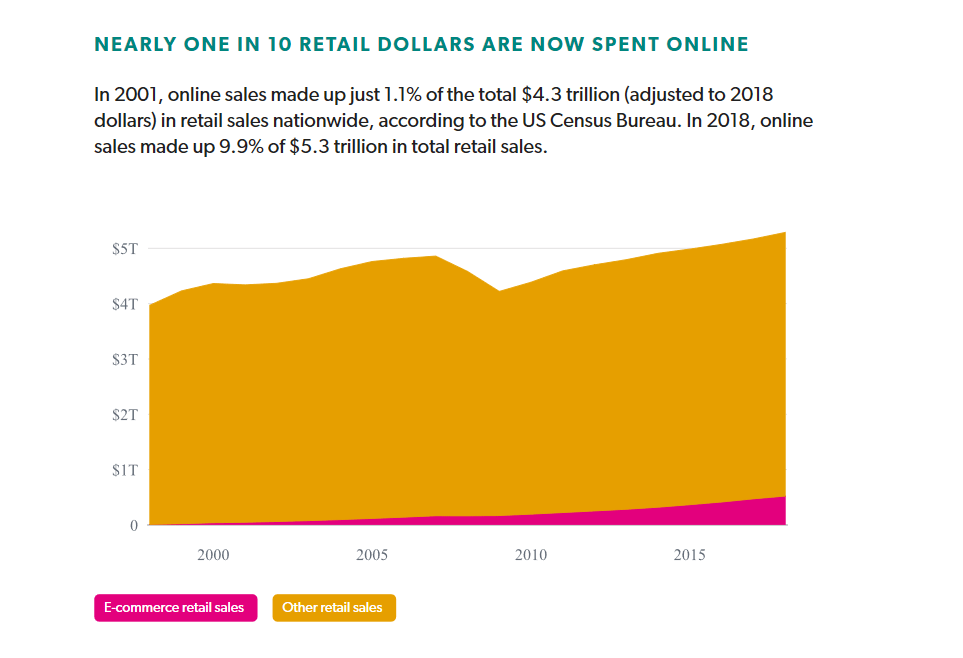 Gearing Up For The Holidays

As we approach the holidays the risks are huge for retailer and consumer alike if they fail to address the new requirements. From the retailer perspective there is large tax exposure and possible interest and penalties now that all but two states have adopted requirements for remote sellers of goods and services to register and commence collecting tax. Some of these states have had the rules in effect before Wayfair was originally decided in June 2018. A large number of states have had these rules in effect since 2018 (28 states) and the balance have been effective for at least one quarter of 2019. As such there likely will be little tolerance by the states for any retailer that does not commence collecting sales tax on remote sales. However, for those companies that are struggling to comply there are still opportunities to limit the potential exposure in the form of coming forward on a voluntary basis.

Eighteen months post Wayfair, we have not observed the states aggressively enforcing collection requirements. This behavior is likely because the states are currently struggling to keep pace with the enormous volume of new taxpayers that are both registering to collect tax and those that are seeking permission to limit prior years’ exposure via participation in Voluntary Disclosure Programs offered by the majority of states.

But the carrot phase will only last so long. Before long, states will undoubtedly move to the stick phase. This phase of enforcement can be quite painful. The failure to register and collect first means that companies will be required to pay tax that should have been paid by the consumer. With an average sales tax rate of 8%, that is a huge expense. Tack on an additional average 25% for penalties and interest on top and the consequences become apparent.

For the retailer or seller, the increased sales volume around the holidays necessitates a proactive approach to collecting tax or the likelihood of increased tax exposure down the road. For the consumer, the days of avoiding sales tax on purchases by buying online are nearing an end. It would not be surprising to find that most Internet sellers are charging tax this year, but if you are a tax nerd, you may want to just take a look at the rate and make sure it is correct as many companies have struggled to just get tax applied to sales.

Unfortunately, determining where tax should be turned on in almost every state, what rates should be charged and what items are subject to tax or exempt is not always an easy and quick process. Most small- and medium-sized companies lack the resources to manage this process effectively. Partnering with specialists such as Duff & Phelps to navigate the new rules can save countless headaches, time and money.

Probably the largest risk businesses face due to the advent of Wayfair is risk of adverse publicity in the media as result of either under- or over-compliance. If retailers fail to collect the correct tax at the correct rate in the approximate 10,000 state and local jurisdictions, it can lead to huge financial exposure.

Conversely, there is equal risk if companies collect tax on goods/services that are otherwise exempt from tax or at a greater rate than is provided for in the statutes (and many of the rates frequently change with little or no notice).

In these instances, retailers are exposed to class action or whistleblower claims that are actively pursued by attorneys who are aggressively searching for opportunities to file refund claims, even if the overcharges are nominal on a per sale/consumer basis. News reports of these claims can also cause huge reputational risk if these actions gain attention in the news or on social media posts.

Consumers now have become accustomed to paying sales tax on Internet sales, so the adverse reaction that may have been anticipated was in large part overstated. However, from a consumer’s point of view there is some risk of being charged duplicated sales on Internet sales, first by the marketplace facilitators (Amazon, PayPal etc.) and then again accidentally by the marketplace seller (retailer). So, consumers should be careful to scrutinize all of their bills, particularly for larger purchases.

U.S. E-Commerce sales currently average out at 9.1% of total sales[6]

For Holiday Shopping, The Government Might Be The Real Winner

While deal-hungry consumers are out shopping on Black Friday and Cyber Monday, and retailers are hoping to hit record level sales, the real winner might just be the state and local governments. Retailers work hard to try to hit the mark on meeting customer expectations. Shoppers work hard to find the best deals around even to the point of risking bodily injury to get the latest electronics at an unheard-of price. The holiday shopping season is exhausting and expensive for sellers and consumers alike. At the end of the season, shoppers are left with credit card bills they may struggle to pay. Retailers are hoping the season was good enough for them to make it another year. And through all of this, with no risk or effort on their parts, the state and local governments will be the only entities that are guaranteed to get paid making them the real winners of the holiday shopping season.

Robert Peters is a Managing Director at Duff & Phelps and serves as the national practice leader for the Unclaimed Property and Tax Risk Advisory practice. He has more than 30 years of experience providing state, local and federal tax services to corporate clients. Dustin Jensen is a director at Duff & Phelps in the State and Local Tax Services practice, specializing in Sales and Use Tax Services. He has over 17 years of experience concentrated in providing sales, use and other transaction tax services to corporate clients.