Retailers often refresh their look to represent a change in the customer experience or evoke a new sense of brand identity. While both these reasons apply to Zulily’s decision to refresh its logo and color scheme, the e-Commerce retailer underwent the change for a reason not often applied by retailers: it was simply better for mobile shoppers.

With as many as 72% of all orders placed from mobile devices, according to a company statement, Zulily changed its logo specifically with mobile devices in mind. Mobile’s influence on retail is undeniable at this point, and with customers using the devices both to shop as well as to just browse, it makes sense to go beyond simple site design changes.

Zulily’s belief is that the changes reflect how their mobile shopping experience primarily should be about “fun shopping, not transactional e-Commerce,” Naama Bloom, VP of Brand Marketing at Zulily said in a statement.

“Zulily’s brand personality has evolved: We want to set a tone and tenor where we are playful, energized, confident — and most of all, inclusive,” said Bloom. “We have an incredible opportunity in our next phase as a brand to really bring to life Zulily’s core specialty: The thrill of the find, where our customers shop a new store every day that leads to Zulily becoming a part of their daily habit.”

Aside from the logo change, Zulily also updated its color palette, focused on two main colors: Discovery Purple, the main brand color, followed by the deeper Empowered Plum, for use in support. The purple hues will be accented with Smart White, Rich Black and Daybreak Blue for a thoroughly modern approach that pops on digital channels.

Brand changes can be difficult, especially in retail where, companies can have millions of consumers who are used to identifying them by their logo or color scheme. Recently, Zara implemented a logo change. The ZARA typeface went from having characters with large spacing in-between to instead being pushed closely together so that some parts overlap or merge together. Details also have been exaggerated, so there are now curved accents on the Z and R letters.

While these changes are likely not highly noticeable to most shoppers, it’s the company’s first logo change since 2010 (and only the second in its 45-year history), so there was sure to be criticism on that front alone. Additionally, some consumers said the logo felt “cramped and crowded” and that the company “forgot the spaces” when designing it.

While Zulily doesn’t share the long history of Zara — it was established in 2009 — the design could throw people off at first. But if it does in fact appear easier on the eyes from a mobile perspective, then Zulily is at least getting that part of the equation right. 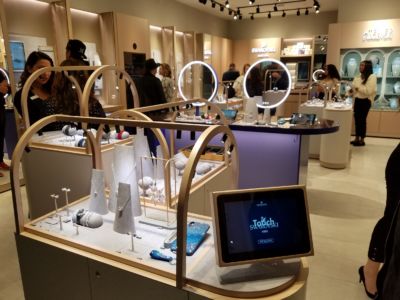