A U.S. Supreme Court ruling may put a larger burden on even the biggest e-Commerce players by eliminating one of their biggest advantages — pricing. Online-only retailers will now be required to collect sales taxes even in states where they don’t have a physical presence, the Court ruled.

In a 5-4 ruling against Wayfair, Overstock.com and Newegg, the justices overturned a 1992 Supreme Court precedent from Quill Corp. v. North Dakota. Quill had barred states from requiring businesses with no “physical presence” in that state — such as out-of-state online retailers — to collect sales taxes.

Retailers that still make the bulk of their sales in-store have long argued that they operate at a disadvantage by having to charge sales taxes, while many of their online competitors do not.

For smaller pure play retailers, the issues are about both cost and complexity. SMBs that aren’t familiar with operating under sales tax rules across multiple states and jurisdictions will have to implement tax compliance software and train themselves to use it. In his dissenting opinion, Chief Justice John Roberts agreed that the burden would “fall disproportionately on small businesses.” Roberts wrote:

“People starting a business selling their embroidered pillowcases or carved decoys can offer their wares throughout the country — but probably not if they have to figure out the tax due on every sale,” Roberts wrote. “And the software said to facilitate compliance is still in its infancy, and its capabilities and expense are subject to debate.”

Retail TouchPoints has compiled insights and opinions from industry analysts and trade association leaders on the ruling, including who are the biggest winners and how this will affect e-Commerce retailers going forward.

“The biggest winners are Amazon and large brick-and-mortar players.  The ruling impacts large scale and pure play online operators that don’t have operations in multiple states…those are the retailers affected.

“Amazon’s third-party seller network should not be affected. The Supreme Court clearly states that the law needs to have a safe harbor for small businesses. In the end, the big challenge is not so much absolute price but complexity — it’s now harder for those retailers to communicate price to customers as clearly as they used to.”

“Clear winners? The states who collect the taxes now of course, but also huge companies like Amazon and Walmart, that are already charging taxes in many places and can ‘low-ball’ prices on a grand scale and make up for any consumer injury on the tax front. Another winner is physical stores. There certainly was/is a percent of the online customer base who avoided paying sales tax in any way possible, and buying online has certainly enabled that. No more.

“Clear losers? Smaller retailers — it used to be, you could sell your goods anywhere and at a fair price, now, if your operation sells mostly to New Yorkers or Californians, big downside. Unlike huge retailers who can take from one big kitty (or AWS) and save the day when they compete in high tax states, no such advantage will happen with smaller retailers. It’s a big company bonanza.”

“The biggest winners in this ruling are scaled, online retailers already collecting taxes across most of the country. Amazon, with its 140 fulfillment centers and various other business operations was already collecting taxes across the entire U.S. It is also well prepared to start levying taxes on behalf of its third-party sellers if laws related to taxes on marketplaces become more widespread. While some 3P sellers may feel the effect of that type of new legislation, Amazon is insulated as the marketplace operator. This decision really only hurts smaller online retailers or marketplaces who are unprepared for it, and have to start collecting taxes in vastly more states than previously due to their more limited operations.

“I think the ruling could be somewhat disruptive to the relationship any online retailer with larger ticket items has with consumers. Sales tax can make a big difference in the shopper’s decision-making process on an expensive purchase, like a television or appliance. These high consideration purchases were already challenging to convert online, and new costs for some shoppers will only increase this challenge.”

“Retailers have been waiting for this day for more than two decades. The retail industry is changing, and the Supreme Court has acted correctly in recognizing that it’s time for outdated sales tax policies to change as well. This ruling clears the way for a fair and level playing field where all retailers compete under the same sales tax rules whether they sell merchandise online, in-store or both.

“While today’s decision is a major victory, there’s still work to be done. Congress must now follow the court’s lead and pass legislation implementing uniform national rules that provide consistency and clarity for retailers across the country.”

“Today’s decision culminates years of tireless work by the retail community to reverse a pre-Internet era rule that distorts free markets and puts local brick-and-mortar stores at a competitive disadvantage with their online-only counterparts. This was the right case and the right time for the Court to act, and we couldn’t be more pleased with the outcome. For the consumer, this means an increasing array of options both in-store and online, with competition for their business based on price, service, selection and value — not special tax treatment.“

“Today’s U.S. Supreme Court decision permitting states to force online shoppers to pay sales tax for their purchases is a victory for brick-and-mortar retailers. In the case of Amazon, its proprietary sales will be largely unaffected as it is already collecting sales tax in ‘sales tax’ states in which it operates a physical presence. However the impact on its growing third-party business could be meaningful as, up until now, a chunk of these sales have not been taxed.

“As Amazon has continued to thrive despite losing the obvious pricing benefit it used to have from not collecting sales taxes in its proprietary business, it remains to be seen if this new ruling will have any real impact on its third-party sales, or if the convenience for shoppers and growing benefits to Prime members will mitigate the pricing shift.”

“We are officially in a new era of sales tax. What we have considered to be foundational principles that define where businesses must collect and remit sales tax, are now entirely out the window. States now have almost a blank state on which to write, and businesses will face a wave of new rules for tax compliance.

“Any business that sells through e-Commerce should pay close attention to state rules, especially in the 20 states that have introduced the same or similar rules as South Dakota. Businesses that sell through e-Commerce channels will need watch each state into which they sell goods for new laws that are sure to come quickly, and they will have to monitor whether those states’ will be litigated under this revived standard set by Complete Auto Transit, Inc. v. Brady and Pike v. Bruce Church Inc.”

Overstock.com released a statement in the wake of the ruling, indicating that while the retailer is prepared to comply with any changes, it still calls on Congress to intervene and legislate a solution that would lessen possible impacts on innovative Internet startups.

“Today the U.S. Supreme Court has re-shaped the interstate commerce landscape in a move that could impact small business innovation on the Internet, which has been a driving force behind our nation’s economy for the last 15 years,” said Jonathan Johnson, a member (and former Chairman) of the Overstock.com Board of Directors. “The framers of the Constitution intended Congress to regulate interstate commerce by thoughtful legislation. To lessen the potential impact of today’s ruling on Internet innovation, Congress can, and should, pass sound legislation allowing states to accomplish their aims while still permitting small Internet business to thrive.” 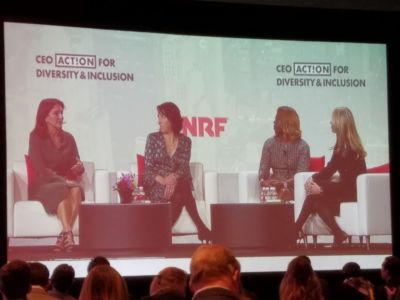