After retail got hit with the tough (though controversial) news that industrywide sales fell 1.2% in December, anticipation loomed — how did individual retailers do? Shortly after, Walmart showed that it muscled its way to a stronger season than the year before, but the jury was still out on how others fared. Now that more quarterly results are in, a few key trends have emerged:

Perhaps the biggest news of the quarterly earnings week came from Gap and L Brands, parent company of Victoria’s Secret and Bath & Body Works. Gap and Old Navy are splitting into two separate public companies, with Gap now set to close 230 of its 1,200+ namesake stores by 2021, after Gap Brand same-store sales declined 5% in Q4.

Same-store sales at Victoria’s Secret dropped 3% in Q4, and e-Commerce appears to be doing better than physical store sales: brick-and-mortar same-store sales dipped 7% during the quarter. Like Gap, L Brands is responding with store closures, announcing it will shutter 53 of 1,140+ Victoria’s Secret stores. The brand overall has struggled to keep up with changing tastes and growing competition from brands such as such as Aerie, ThirdLove and Adore Me.

The company has pulled back on investing in new and remodeled Victoria’s Secret stores and is speeding up its store closure plans, which had previously averaged 15 stores per year, executives revealed during an earnings call.

Gap and L Brands weren’t the only struggling retailers to announce store closures during their Q4 earnings. JCPenney unveiled it would close 27 stores in 2019, including 18 full-line department stores. Closing stores is nothing new for JCPenney at this point; the retailer closed 138 stores in 2017 and eight more in 2018. The department store now has approximately 800 stores left in its portfolio.

Other leading department stores showed mixed results, with Macy’s unveiling a $100 million cost-cutting plan in the midst of its continued transformation.One month after revealing that its November-to-December same-store sales increased only 1.1%, the retailer saw same-store sales growth of 0.7% in the complete holiday quarter, short of 0.9% expectations.

On a positive note, Macy’s saw adjusted earnings per share of $2.73 on net income of $740 million, higher than expectations of $2.53 per share. Going forward, the retailer will focus on upgrading its present store locations and adding more brick-and-mortar offerings. In 2019, Macy’s will double the number of The Market @ Macy’s pop-up shops within its stores and open 45 more off-price Backstage locations.

Nordstrom reported better-than-expected Q4 profits, but missed analysts’ sales estimates amid an unexpected slowdown in traffic at its full-priced stores during and after the holidays. Net sales were down 4.7% for the quarter, but 2018 did have one less week than the same period the previous year. Net income in the quarter rose to $248 million from $151 million one year ago, primarily thanks to lower income taxes associated with corporate tax reform.

The least-talked about major department store, Dillard’s, had arguably the most positive earnings report among its peers. Q4 same-store sales rose 2%, well ahead of analyst expectations of 0.5% growth, and marked the company’s fifth consecutive quarter of positive comparable sales. Adjusted net income grew 6% to $85.1 million, while adjusted earnings per share rose 14% to $3.22.

There were still some flaws in Dillard’s performance — retail gross margin slipped to 30.3% last quarter from 31% a year earlier. This was partially offset by good expense control, as retail operating expenses improved to 23.2% of sales from 23.6% of sales.

While many department store retailers still have a lot of work to do, Best Buy displayed just how much progress it has already made during the holiday season. The retailer continues to entice shoppers with services such as the Total Tech Support subscription program and the In-Home Advisors program.

On a two-year stacked basis — percentages added together from back-to-back years — annual comparable sales posted their best performance in 14 years at 12%, CEO Hubert Joly said on an earnings call. Q4 earnings came in at $2.69 per share, up nearly 41% from the same period last year and well ahead of Wall Street forecasts of $2.56 per share.

E-Commerce sales increased to nearly 22% of the company’s U.S. revenue, up from 20% last year.

“The 3% increase in comp store sales for Q4 was augmented by online growth of over 9%, which needs to be viewed in the context of an over $8 billion online base in a highly-penetrated sub-segment of retail as well as the strong physical store performance, with operating margin of 6.6% reflecting meaningful year-over-year improvement,” said Charlie O’Shea, VP and Lead Retail Analyst at Moody’s in commentary provided to Retail TouchPoints. “The effectiveness of Best Buy’s strategy and strength of its competitive position are validated by its full-year 4.3% comp store and 10.5% online sales growth.” 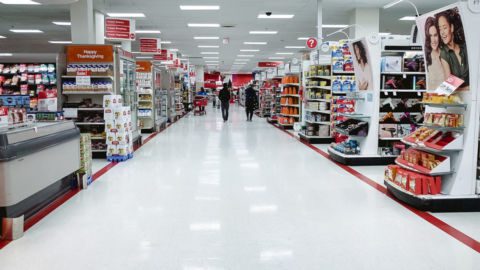