Walmart has opened its first small-format, high-tech supermarket in Shenzhen, China, according to Reuters. The store carries items that consumers also can buy on the online platform JD Daojia, an affiliate of JD.com. Walmart has not released information about the size of the store, but it will stock more than 8,000 items, ranging from stir-fried clams to fresh fruit, 90% of which also will be available online.

Items can be delivered within a two-kilometer (1.2 mile) radius as quickly as 29 minutes, and customers can opt to pay with their smartphones using the WeChat platform. Walmart recently implemented WeChat Pay into its mobile offering, replacing Alipay in all its stores in the western region of China.

While very few specifics have come out about the small-format supermarket, the tech-driven store follows in the footsteps of the supermarkets built by Alibabaand JD.com, which Walmart owns a stake in. These stores are designed to blend online and offline experiences across a single value chain. Alibaba labels the growth of its Hema supermarkets as part of its “New Retail” strategy, and is on track to open 30 Hema stores in Beijing in 2018.

The supermarkets are designed to cater specifically to mobile consumers, particularly those within a three-kilometer radius, to ensure fast, high-level service.Hema logs every purchase and saves all shopper preference data, and then uses location-based machine algorithms to plan the quickest delivery routes.

JD’s 7FRESH grocery chain uses data from 266.3 million e-Commerce consumers to craft the shopping experience, integrating several technology elements such as “magic mirrors” that sense when customers pick up an item of produce, automatically providing them with nutrition facts.

In both Hema and 7Fresh stores, customers within the neighborhood can either carry their goods home themselves or have them delivered in 30 minutes.

As Walmart ventures further into China, the retailer is seeking to reduce its carbon footprint throughout the country. The company has unveiled a goal to reduce greenhouse gas emissions in its China value chain by 50 million metric tons by 2030 — equivalent to the emissions associated with the average annual electricity consumption of 40 million Chinese households.

As part of the program, called Project Gigaton, Walmart is seeking to enroll all its export and domestic suppliers in China — starting with 100 of its top suppliers — into an emissions reduction program.

Through Project Gigaton, Walmart will work with its suppliers to reduce emissions in its global value chain by one billion metric tons – a gigaton – by 2030. More than 400 suppliers in China, India, the U.S. and other countries have joined Project Gigaton, and Walmart plans to continue to expand the program, which is in alignment with the Paris Climate Agreement. 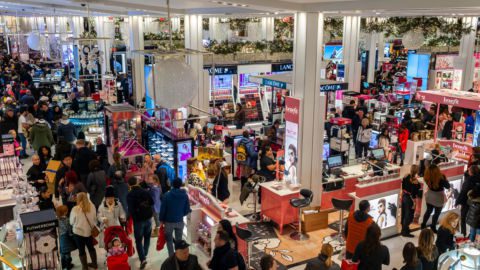