Walmart’s technology incubator Store No. 8 has created its third portfolio company, with the acquisition of virtual reality (VR) platform and content studio Spatialand. The combined team will develop and explore new products and uses of VR that Walmart can use, both in-store and online.

As of now, there are no specifics on what the Spatialand team will be looking to create for Walmart, and the team’s work may not be revealed for 12 to 18 months, according to a report from Recode. The Spatialand web site has even gone dark, only including the note: “We’re joining Walmart’s Store No 8. Click here to learn more.”

The new venture will operate in this stealth mode, with Spatialand CEO Kim Cooper and Store No. 8 Chief Product Officer Jeremy Welt serving as the Co-Founders. Katie Finnegan, the Principal of Store No. 8, will serve as the company’s interim CEO. Approximately 10 Spatialand employees will join Walmart in the deal. Financial terms of the deal have not been disclosed.

Store No. 8 and Spatialand initially partnered during the competition, creating a VR experience that transported users to a campsite in Yosemite National Park.

Cooper and Welt have VR experience from the entertainment industry, according to a blog post from Finnegan. Under Cooper, the Spatialand platform created content destinations in projects with Oculus, Intel, Reebok and Linkin Park. Cooper worked on films like Iron Man, Rogue One: A Star Wars Story and Prometheus, as well as on video game franchises such as Destiny and Metal Gear Solid.

As a VR strategy and product advisor, Welt helped launch YouTube’s first commercial deal and worked on the Walt Disney Company’s acquisition of Maker Studios. Most recently, he has worked as a consultant for companies such as Splash and Mindshow.

“‘VR’ is an industry buzzword right now,” said Finnegan in the blog post. “And the majority of the technology that has been created in this space has been focused on the development of hardware and content for spaces such as gaming and entertainment, ignoring the range of possibilities available in retail. At our core, we are merchandisers and storytellers, which drives us to believe that virtual reality has the potential to reinvent the consumer experience — with an experience we call contextual commerce.”

Other Store No. 8 projects include an initiative to build a cashierless store similar to Amazon Go, led by Jet.com Co-Founder and CTO Mike Hanrahan, and a personal text-message based shopping service run by Rent the Runway founder Jenny Fleiss. 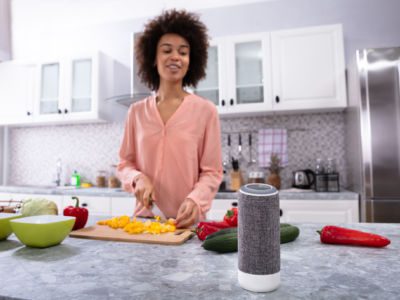 Voice Commerce: Stress Customer Value Both In-Store And At Home