Costco posted a 7.3% sales increase for Q1 2020, largely fueled by a 66.1% jump in e-Commerce sales. The initial stock-up period at the beginning of the pandemic tapered off in April as customers sheltered in place.

Net income was $838 million compared to $906 million in Q1 2019, dragged down by $283 million in wage increases and sanitation-related costs. The retailer’s results also were hit by spending habit shifts, as shoppers picked up more low-margin food products and fewer big-ticket items like luggage.

Nordstrom, like many other department stores, had a much weaker quarter: overall sales fell 40%, with full-price locations dropping 36% and the off-price division declining 45%. The declines were attributed to store closures, though the retailer has reopened about 40% of its locations and plans to have all stores operational again by the end of June.

Nordstrom believes it has the liquidity necessary to survive the current crisis without resorting to bankruptcy, unlike fellow department stores Neiman Marcus, JCPenney and Stage Stores, though Nordstrom will likely close some stores. The company entered 2020 with $850 million in cash reserves, and has plans to save $500 million in operating expenses, capital expenditures and working capital during fiscal 2020.

The retailer also has an eye on the future: it is making greater use of store-based fulfillment to save on delivery costs, and can leverage its Nordstrom Rack stores to sell merchandise that is now out of season while full-price stores were closed.

“It is clear we can seamlessly engage with customers through our Nordstrom and Nordstrom Rack brands, across stores and online,” said Pete Nordstrom, President and Chief Brand Officer of Nordstrom in a statement. “We have a unique mix of assets, and the flexibility of our business model continues to serve us well. In 2019, our off-price and e-Commerce businesses accounted for nearly 60% of sales. As we anticipate an acceleration of these longer-term customer trends, we’re taking proactive steps to move faster in executing our strategic plans.”

Abercrombie has a similarly positive outlook despite its troubles. The retailer reported a 30% sales decline for the quarter, but noted that 45% of its stores already have reopened — and those locations have returned to 80% of their usual sales volume, according to CNBC.

The rapid recovery was attributed to the brand’s teenage base, who are eager to get back outside as the pandemic fades. Strategies such as Hollister’s virtual prom, which drew more than 70,000 attendees, may have helped Abercrombie hold on to its customers even without its physical stores as an attraction. 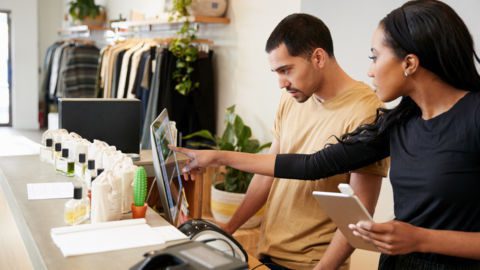